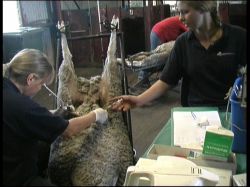 Preparation of Females for Insemination

The success of an AI program depends as much on the fertility of the females as the quality of semen used for insemination.

Several weeks before the start of the program attention should be paid to the condition of the females.

Females should be in good health, free of disease and parasites, and in good body condition. Sick or malnourished females will often fail to ovulate or suffer a high rate of embryo mortality.

Nutrition is a very important factor in ensuing the success of the AI program. Ewes should be on a rising plane of nutrition and they should be on a condition score of 2.5 to 3 at the time of AI.